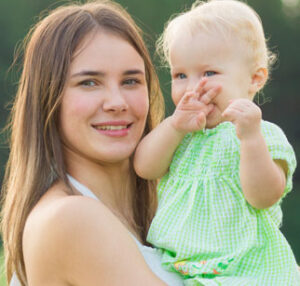 Before I arrived in the loving arms of the Florence Crittenton Home I was a hurting, scared little girl who was only a shadow of herself. I was only eight months clean from meth, which was my way of coping with the pain I was feeling. I received daily beatings with a bat which hurt… but the emotional abuse dug deeper into my soul. Constantly being told I would never amount to anything, I was not loved, I did not belong anywhere; my life felt worthless. The two people in my world who were supposed to protect me and be my safety net were just the opposite. I was alone. The environment I had to live in was unsanitary and unhealthy as well.

I arrived at Florence in so much pain and with my two day old daughter. I had no desire to live, only to be freed of the pain. My years at the home were difficult but I found in time I would learn to live. There were days in which I lost my privileges but there were also the days I received all my privileges and found my successes. I have learned all of us make choices and have consequences for them, both the good and the bad. Shortly after leaving the home I made a choice, I gave my two year old daughter a chance to have the childhood I never got and gave her to a loving family.

Now that I have been out of the home for eight years I have set certain goals in which I am determined to complete. One in which I would like to become a counselor. I already have my associate’s degree in psychology and am enrolled in the bachelors program. I have a loving husband of 6 years. In 2006, Florence Crittenton gave us the most extraordinary wedding. The wedding officially helped me draw out my path. I could have chosen to follow the dysfunction and pain in which my relatives had laid out for me, or I could choose to give a voice to other abuse survivors, teens, and young moms; bringing them hope and giving them strength. Well, I chose to be the voice. Florence Crittenton has shown me a better world and given me a family – such as my mother figures like; Sarah Smith, Joan Fitzgerald, and Barb Burton to name a few.

If you had asked me ten years ago were I see myself in ten years I would have said “dead.” I did not believe my life was worth saving and was convinced I was going to die. Today, I have the sweetest son and we have an incredible relationship. I have a loving husband, a home, and a bright future.
I will be a part of the same community which has given me so much courage, strength, and hope.

Save the Date for Paint the Town Pink on Saturday February 11th 2023!

Dust off your dancing shoes, PINK is back!
Join us for a roaring good time with sumptuous decor, gourmet food, live music and incredible live and silent auctions.
Bring your best dance moves for the party of the year and know your presence is changing the lives of families in our community.